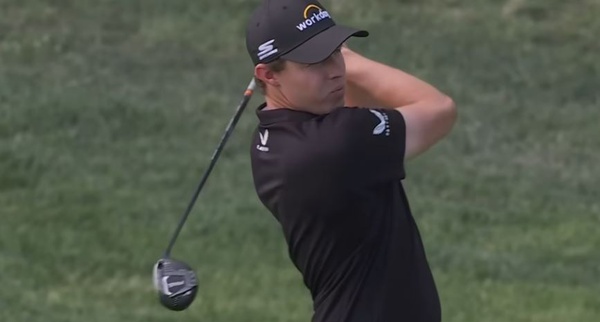 Matthew Thomas Fitzpatrick (born September 1, 1994 in Sheffield) is an English professional golfer. After winning the U.S. Amateur in 2013, he later won his first professional tournament at the 2015 British Masters.

In 2022 he won his first major championship and his first PGA Tour event at the U.S. Open.

Fitzpatrick was born in Sheffield and attended Tapton School, where he graduated from high school in 2013. He is an avid soccer fan and a lifelong supporter of local club Sheffield United.

His younger brother, Alex, played collegiate golf at Wake Forest University in North Carolina. Alex played in the 2019 and 2021 Walker Cup and turned professional in 2022.

Silver at the 2013 Open Championship

Fitzpatrick won the Boys Amateur Championship at Notts Golf Club (Hollinwell) in 2012. He made the cut at the 2013 Open Championship and won the silver medal.

Fitzpatrick and Jimmy Mullen were the only amateurs to make the cut, with Fitzpatrick finishing on 294 to Mullen's 299. Later in 2013, Fitzpatrick won the U.S. Amateur, which earned him invitations to the 2014 Masters Tournament, the U.S. Open and the Open Championship, provided he remained an amateur.

Leader of the Amateur Golf Ranking

The U.S. Amateur victory propelled him to the top of the World Amateur Golf Rankings, earning him the Mark H. McCormack Medal. In September 2013, he played in the Walker Cup.

In September 2013, Fitzpatrick enrolled at Northwestern University to play college golf with the Northwestern Wildcats; however, he left after a quarter, in January 2014, to pursue a full-time amateur golf career.

Five tournaments for the university

In the fall of 2013, he competed in five tournaments for Northwestern. He was co-champion of the Rod Myers Invitational at Duke University to lead Northwestern to the team title and also finished third at the Windon Memorial Classic.

Fitzpatrick turned pro after the 2014 U.S. Open and forfeited his 2014 Open Championship exemption, making his professional debut at the 2014 Irish Open, then playing several competitions on the European Tour and Challenge Tour on sponsor and tournament invitations.

In November 2014, Fitzpatrick entered the 2014 European Tour Qualifying School, where he finished 11th and qualified for the 2015 European Tour.

Fitzpatrick began the 2015 season by missing six cuts in the first eight contests of the season; he secured a third-place finish at the Lyoness Open in June, followed by a runner-up finish at the Omega European Masters in July 2015, one shot behind Danny Willett, to win the €300,000 second prize.

His first victory came in October 2015, when he won the British Masters in Woburn, winning the first prize of £ 500,000. Following that result, he entered the world's top 100 for the first time, ranking 59th.

He finished his rookie season on tour with one win, nine top-10 finishes and a 12th place in the final Order of Merit.

32nd in the world rankings

In April 2016, Fitzpatrick competed in the 2016 Masters Tournament and finished in a tie for 7th place. In June, he won the 2016 Nordea Masters and reached the 32nd place in the Official World Golf Ranking, his best ranking so far.

Based on his results in the 2015 and 2016 seasons of the European Tour, he received an automatic selection for the 2016 Ryder Cup.

In November 2016, Fitzpatrick won the DP World Tour Championship in Dubai by one stroke over Tyrrell Hatton for the third victory of his career.

In September 2021, Fitzpatrick played on the European team in the 2021 Ryder Cup at Whistling Straits in Kohler, Wisconsin. The U.S. team won 19-9 and Fitzpatrick went 0-3-0, including a loss in his singles match to Daniel Berger. Three weeks later, Fitzpatrick won the Estrella Damm N.A. Andalucía Masters at Real Club Valderrama.

In June 2022, he won his first major championship at the U.S. Open with a one-shot victory at The Country Club in Brookline, Massachusetts - the same venue where he won the 2013 U.S. Amateur.