Posted by: Kai 1 month ago 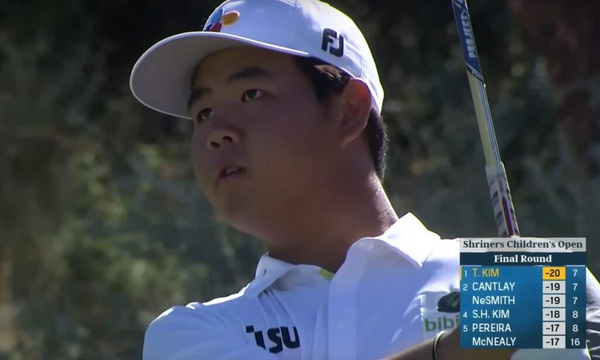 Kim Joo-hyung (Korean: 김주형; born June 21, 2002), also known as Tom Kim, is a South Korean golfer who made history by winning the Shriners Children's Open in Las Vegas as the second-youngest multiple winner on the PGA Tour.

The 20-year-old South Korean is the first player since golf legend Tiger Woods in 1996 to record two PGA victories before his 21st birthday.

Son of a golf pro

Born in Seoul, South Korea, Kim is the son of a professional golfer, Kim Chang-ik, who played on the Buy.com Tour before becoming a teacher.

Kim turned professional in May 2018, playing on the Philippine Golf Tour. In 2019, he initially played mainly on the Asian Development Tour.

Advancing to the Asian Tour

He won the Ciputra Golfpreneur Tournament in Indonesia in August after a deciding match and the Raya Pakistan Open in October by nine strokes. His third win earned him automatic promotion to the Asian Tour for the remainder of 2019.

In November, he won the Panasonic Open India, becoming the second-youngest professional to win on the Asian Tour at 17 years and 149 days. The event was reduced to 54 holes due to smog.

In early 2020, he finished fourth in the SMBC Singapore Open. The event was part of the Open Qualifying Series and his high finish earned him an entry into the 2020 Open Championship, his first major championship.

Kim won the Singapore International 2022, beating Rattanon Wannasrichan in a playoff. The following week, he finished second at the SMBC Singapore Open to become the leading money winner of the 2020-21-22 Asian Tour season.

In July, Kim soloed to third at the Genesis Scottish Open, a jointly sanctioned event by the PGA Tour and European Tour; he was one of three players to earn access to the tournament through the Korea Professional Golfers'.

With a T47 score at the 2022 Open Championship, Kim became eligible for Special Temporary Membership on the PGA Tour for the remainder of the 2021-22 season. He earned his PGA Tour card for the 2022-23 season with a 7th-place finish at the Rocket Mortgage Classic.

Kim qualified for the international team at the 2022 Presidents Cup; He won two and lost three of the five matches he played, and was hailed by the media as one of the stars of the event for his entertaining play.