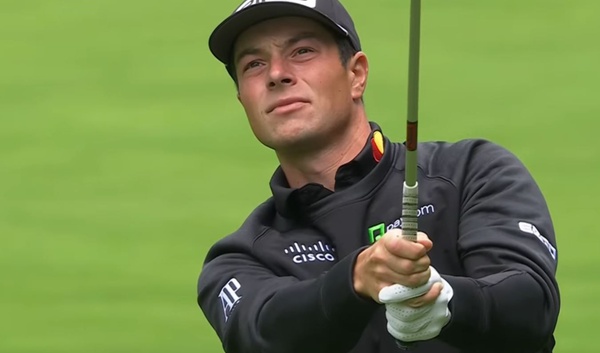 Viktor Hovland (born September 18, 1997 in Oslo, Norway) is a Norwegian professional golfer who plays on the PGA Tour. He won the 2018 U.S. Amateur and then became the first Norwegian to win on the PGA Tour (at the 2020 Puerto Rico Open) and on the European Tour (at the 2021 BMW International Open). Hovland picked up his second and third PGA Tour wins at the Mayakoba Golf Classic in 2020 and 2021.

Started golf at the age of eleven

Hovland first got into golf at the age of eleven through his father, an amateur player. By the age of 23, he had already made his mark on the PGA Tour with a victory and ranked in the top 25 of the world rankings. This unprecedented career could already be foreseen when Hovland played as an amateur virtually in a league of his own, leaving his opponents hardly a chance in many tournaments.

The Norwegian achieved his first successes when he played college golf at Oklahoma State University: In 2014, he won the Norwegian Amateur Golf Championship.

After winning the U.S. Amateur in 2018, which was preceded by a long and very intensive training of his stroke technique, the ambitious young player received invitations to the 2019 Masters Tournament, the 2019 U.S. Open and the 2019 Open Championship. He played in the 2018 Emirates Australian Open as an amateur and finished in a tied 13th place.

Hovland competed in the 2019 Masters Tournament in low amateur status and finished 3-under par in 32nd place. With this performance, he moved up to first place in the World Amateur Golf Rankings. He finished in 12th place at the 2019 US Open.

From Norway to the USA

The Norwegian, who now resides in the U.S., turned professional after the 2019 US Open and made his professional debut at the Travelers Championship in June. In doing so, he forfeited his automatic entry into the 2019 Open Championship.

In August 2019, Hovland finished tied for second at the Albertsons Boise Open, part of the Korn Ferry Tour Finals. That finish secured him a PGA Tour card for the 2019-20 season.

In February 2020, when he won the Puerto Rico Open, Hovland became the first Norwegian to win on the PGA Tour. In December, he picked up his second PGA Tour victory and his first in a PGA Tour tournament at the Mayakoba Golf Classic with a birdie on the 72nd hole.

In June 2021, Hovland became the first Norwegian to win on the European Tour, accomplishing that with his victory at the BMW International Open.

On the European Ryder Cup team

In September, Hovland played on the European team in the 2021 Ryder Cup at Whistling Straits in Kohler, Wisconsin. The U.S. team won 19-9; Hovland carded a 0-3-2.

In November, Hovland successfully defended his title at the World Wide Technology Championship at Mayakoba in Playa del Carmen, Mexico. He won by four strokes and set a tournament record of 23-under par.

A month later, Hovland won the Hero World Challenge, finishing at 18-under par, one stroke ahead of Scottie Scheffler.

Key moments in that victory were consecutive eagles in the final round on holes 14 and 15, a victory that solidified his new nickname as golf's "Resort King," as his first 5 professional victories were outside the contiguous United States, including 4 around the Caribbean Sea.

The year 2002 began for Hovland with a top-5 finish at the European Tour's Abu Dhabi HSBC Championship in January. The following week he won the Slync.io Dubai Desert Classic.

After carding a 66 in the final round, he made birdie on the first hole of a sudden-death playoff to defeat Richard Bland. The victory promoted him to third place in the Official World Golf Ranking.

In December 2022, Hovland successfully defended his title at the Hero World Challenge in Albany in the Bahamas.