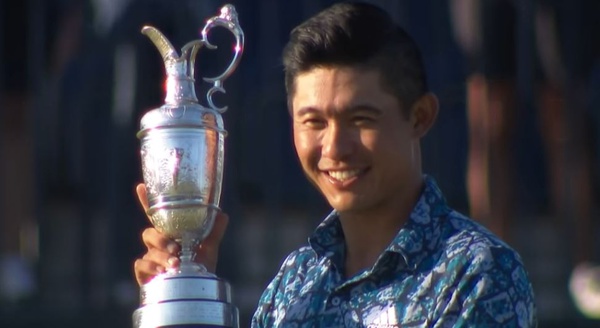 Collin Morikawa (born February 6, 1997 in Los Angeles, USA) is a professional golfer who plays on the PGA Tour and the European Tour.

He began his PGA Tour career with 22 consecutive cuts, surpassed only by Tiger Woods' 25-cut streak. Morikawa has five PGA Tour victories - including two major championships, the 2020 PGA Championship and the 2021 Open Championship - and won both in his debut.

In May 2018, Morikawa led the World Amateur Golf Rankings for three weeks as the top-ranked golfer. He also became the first American to win the Race to Dubai on the European Tour.

Morikawa played collegiate golf at the University of California, Berkeley, from 2015 to 2019, winning five times, including the 2019 Pac-12 Conference Championship. Aside from his collegiate victories, he won the Western Junior, Trans-Mississippi Amateur, Sunnehanna Amateur and Northeast Amateur.

On July 7, Morikawa finished second at the 3M Open. On July 14, he finished 4th at the John Deere Classic. With that, Morikawa secured PGA Tour membership for the 2019-20 season.Two weeks later, Morikawa won his first PGA Tour event at the Barracuda Championship - beating Troy Merritt by three points.

On June 14, Morikawa shared the lead after 72 holes at the 2020 Charles Schwab Challenge, the first PGA Tour tournament played after a three-month hiatus due to the COVID-19 pandemic. Morikawa missed a short par putt on the first playoff hole and lost to Daniel Berger.

On June 26, 2020, Morikawa missed his first cut on the PGA Tour at the Travelers Championship, ending a streak of 22 consecutive cuts, the second-longest streak to start a professional career after Tiger Woods' 25.

On July 12, Morikawa beat Justin Thomas in a playoff to win his second PGA Tour title at the Workday Charity Open. The victory was the first non-alternate PGA Tour win for him. Morikawa erased a three-stroke deficit with three holes remaining and made a 25-foot birdie putt on the first playoff hole to stay in play before winning with a par on the third playoff hole.

Morikawa won the 2020 PGA Championship on Aug. 9, victorious in only his second major championship start at a major. His final round of 64 produced the lowest final-round score by a PGA champion. With his victory at age 23, Morikawa became the third-youngest golfer to win the PGA Championship inside.

In August, Morikawa finished 3rd in the Olympics. In September, Morikawa played on the U.S. team in the 2021 Ryder Cup at Whistling Straits in Kohler, Wisconsin. The U.S. team won 19-9 and Morikawa went 3-0-1, including a tie in his singles match Sunday against Viktor Hovland.

In November, he won the DP World Tour Championship to end the European Tour season in Dubai. He also became the first American to win the Race to Dubai.In February, Morikawa played a final-round 65 at the Genesis Invitational to finish second, two strokes behind Joaquin Niemann.

Collin was born in Los Angeles, California, to Debbie and Blaine Morikawa and is of Chinese-Japanese descent. He graduated from La Cañada High School in La Cañada Flintridge, California, in Los Angeles County. Morikawa graduated in 2019 with a degree in business administration from the University of California, Berkeley.In December 2021, Morikawa got engaged to his longtime girlfriend Katherine Zhu. They married on November 26, 2022.